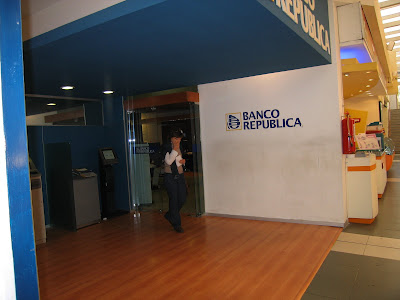 I was able to open a bank account with little effort today in Montevideo. I presented two forms of identification. One of them was my passport, which is required. The other one, my driver´s license from Florida, served as proof of address in the states. Much different from the three other banks I had already tried.

One other bank was willing to open an account but there were a few more requirements. So I went with the easier bank.

Although opening an account in Uruguay still is pretty easy if you find the right bank and fulfill their requirements, there are some things that it might help you to know.

Banking in Uruguay is in a bit of a state of flux right now. For years Uruguay has been known as the Switzerland of South America because of their reputation for safe, dependable banks and strict bank secrecy laws.

Uruguay does not, by law or practice, protect criminals. If someone appears before a Uruguay judge and produces evidence that someone is involved in criminal activity and may be hiding the proceeds in Uruguay, they will open an investigation. But up until now they would not allow someone to go on a fishing expedition into your private matters without showing just cause.

However, offshore banks have been under pressure from the United States in recent years and some are attempting to resolve the problems by refusing to deal with U.S. citizens.

Recently the Montevideo daily newspaper, El Pais, reported that the OECD put four countries on their black list for refusing to comply with OECD requirements to abolish their sovereign bank secrecy laws. Uruguay was one of those countries. The country faced being denied loans from the IMF, the ability to do business in the U.S., and was threatened with an embargo. They signed an agreement to comply.

Some Swiss banks had already been notifying U.S. clients to withdraw their money and close their accounts because they are no longer going to serve U. S. citizens. The Wall Street Journal, on April 8, 2009, reported that one Swiss bank, UBS AG, had barred certain bank employees from traveling outside the country in order to avoid arrest as the U. S. continues attempts to force other nations to abide by their proscribed banking standards. So naturally banks are becoming more and more afraid to deal with U.S. citizens. And more and more cautious when they do.

All of this makes one wonder what ever happened to respect for liberty and national sovereignty. The International Forecaster, a financial newsletter, reported in their March 18, 2009, issue that the Swiss have no intention of complying because they expect the whole financial system to implode before they will need to. Who knows? Probably it will take a little time to find out where all this is headed. AND more importantly, where it ends up!

But in my opinion. Uruguay is one of the safest countries for banking.

Here are things to consider.

Documented proof of the origins of money to transfer into your account is a serious issue. You can deposit a small amount (less than $10,000) with no problem. But they are very concerned about keeping on file documented proof of origin for larger amounts. It is not sufficient that the money is coming from an established account with another bank or brokerage. You need documentaton that can serve as proof of origin.

Therefore, as you are going through possessions, there are a few things you should make a point of hanging on to until you see if you need them.

If you have a closing statement from real estate or something like that, you are okay. Since some residential real estate sales in the United States have no tax implications if we lived there for two years, many of us have not thought it necessary to save settlement statements from those sales. If you are transferring money here that would correspond with the amount of such a sale, that settlement statement is just what you need. So if you come across something like that, don´t throw it away. Bring it with you. And if you threw it away and can somehow replace that documentation, try to do so. For example, if you threw away documentation on a house sale because there were no U.S. tax issues, and you remember the name of the title company, stop in at their office and see what you can get from them. If copies of the original agreement are not available, ask if they will give you a letter stating the sale price. In our experience, they will look  up the record and do that for you.

These days, in the world we live, we have to be creative.

Settlement statements from real estate sales are something they understand here. I can´t say the same for things like brokerage accounts. In fact, when I mentioned to one banker transferring from a brokerage account his response was “People in Uruguay do not understand about that.”

So, to stay on the safe side for now, don´t throw away any of your documentation if there is a chance that it might serve to justify something that you can´t justify otherwise. If you will be transferring money that you inherited, be sure to have that documentation with you. One person that I know who had inherited some money as a listed beneficiary on the bank account of a deceased relative was able to justify the transfer through a letter of verification of origin from the bank.

This week when I did need a letter from my bank I was glad I made the change several years ago. My branch of Suntrust has been absolutely great.

In all fairness to the bankers in Uruguay, I don´t think they want to make things difficult for their customers. I think that they are just doing what the international banking cartel requires in order to keep themselves and their country out of trouble. Perhaps you can make it easier for yourself and for them with this extra information ahead of time, by being prepared when you come.

Following is a list of requirements for opening a bank account as presented to me by a top level Montevideo attorney who claims that he handles more immigrations into Uruguay than any other attorney–and probably does. I have added my experience and observations. And please, if you have something to add, now or later, please post under comments. We are all in this together, don’t forget, and your experience might help someone else! If you don’t want to post, you can email  us at info@fourflagsjournal.com and we may add it for you.

Here is the attorney´s list in bold type with our own comments in parentheses and italics.

(Banco Republica requires two IDs, not just one. In case of a U.S. citizen, passport and driver´s license from the U.S. works fine at this writing. As we all know, things in South America do change. If you find this is different, please send  us a note and keep us up to date.)

( A U.S. driver’s license will serve as proof on a U.S. address. However, you might want to bring a utility bill from your U.S. address since some do require that. One other bank we checked did insist on a utility bill. You could be up the creek on that one if you have no utility bills. They may be unwilling to accept anything else.)

We hope this information will make your transition to Uruguay a little easier. Things in Latin America are always subject to change and so, once again, please submit any additional information or experience that you might have or let us know about changes that you discover. It could help someone else. Also, if you have questions, don´t hesitate to ask.

UPDATE:  As of September 2012, only two banks in Uruguay will consider a U. S. citizen–Banco Republica (BROU) and ITAU.

Finance for Expats
Cafe Botanico, Buenos Aires, Argentina FINANCES FOR THE EXPAT United States citizens and residents who file their tax returns in April just passed through the tax season.  citizens living outside the have extra time to file, and...