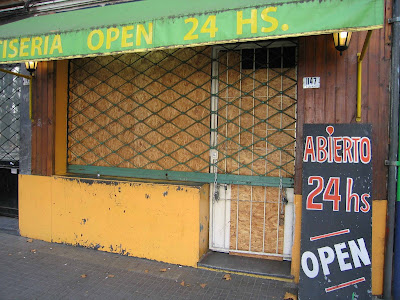 This week in Montevideo was The Big Game. Uruguay met Brazil on the Futbol (soccer) field.

You already know that latinos excel when it comes to celebrating a holiday. They have their priorities in place and holidays are right up there at the top.

Stores close for all kinds of reasons anyway. Once when we were visiting a couple here in this part of the world, she closed down her clothing store because we were there. I said, “But can you do that? What about your customers?”

To which she replied, “It´s my store. I can close it if I want to!” I guess she was right. And you will find that she isn´t the only storekeeper that closes if she wants to.

When you are an expat in this part of the world, holidays often sneak up on you and catch you unawares. But we were not prepared for the city to shut down just because their team was playing soccer. I was warned that I could expect not many people or traffic on the street because most would be either at the stadium, gathered in homes in front of the TV, or at a sports bar.

But the day started out like any other day. Traffic in the streets was about the same and people rushing about, as always. But along about noon all that visibly started to change. Doors were being locked as each customer left the store and finally the metal grillwork was rolled down over the glass in one store after another.

About an hour later the streets were relatively quiet and there were few pedestrians. A few people were still out and about and if they came into the hotel you would hear them ask “What´s the score?”

One more reason for a holiday in Uruguay.