Getting a Driver’s License in Chile 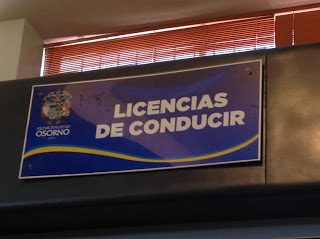 We received our permanent residency about a year ago and by law we should have gotten our Chilean driver’s license but you know how life can be and the time just slipped by.

Despite the rumors we had heard of expats being taken to jail and fined for not having a Chilean license and despite the fact that we could study and take the test in english (effective in 2015), we just kept procrastinating. We were banking on the idea that the local carabineros (Chilean police) don’t know much about foreigners and maybe don’t know that we should have our Chilean license. So we haven’t had any problems yet!

If you are just visiting Chile, you need a valid US driver’s license. The Embassy recommends an International Driver’s license, which you can get from AAA. But when we were pulled over, the officer was not at all interested in that,  just the South Carolina license.

This week we went by the Municipal Building in Osorno to see what we needed to do.

The line was short. I think the line is always short. Most Chileans don’t own a car. Only 230 out of every 1,000 own a vehicle, according to Wikipedia for 2013. (The US has 809 automobiles per 1,000 for comparison). Cars here are expensive and so is fuel; and there is an extensive, reliable, and cheap bus system.

But here is what you must have:

1. Your RUN (or residency) card, also known as your carnet or cedula. This is your national ID card, which you receive when you are approved for temporary residency.

2. A document proving you have received at least an 8th grade education.

For us this was Jim’s Bachelor’s degree, which had been notarized, legalized by the Attorney General of Florida, stamped by the Chilean Consulate of Miami, stamped by the Foreign Relations office in Santiago, and should have been stamped by the Education Ministry also in Santiago but the director of the office gave us a break since we didn’t have this stamp and just had the document notarized again! by the local notary office next door.  It didn’t matter that Jim has been driving for 40 years including cars, trucks, tractors, airplanes, and submarines. They wouldn’t just issue another license. He has to go through the process, which includes a written test, driving test, and vision test.

So Jim signed up to take the test on March 1 for the Class B license for private car owners. Class A is for public transport drivers and Class C is for motorcycles. We paid 29,221 pesos or around $40 USD 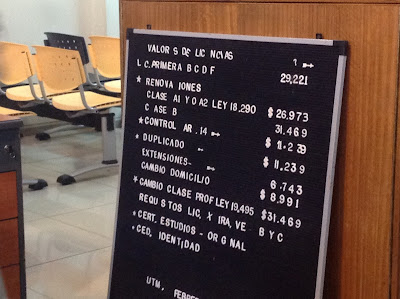 This is a government services website called Chile Atiende and this link goes to the page on driver’s license.

He took the test–and he passed.

But it wasn’t easy. They call it tramites (trah- me tays) here but I call it traum-ee-tays. These are the procedures usually associated with bureaucracy. The inefficiencies of government and its policies are often tiresome and lengthy but we played the game and followed the rules and were rewarded. 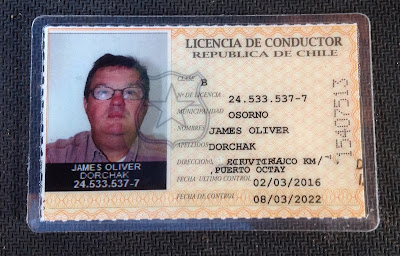 So here is how it went.

Day 1
Jim showed up at 9 AM on Tuesday morning. He waited just a few minutes and then got online for the computerized test in English. You have 45 minutes to complete 35 questions and you can only get 3 wrong. Jim got 4.  Don’t ask how it happened. The English test was written by a non-native speaker and was a little awkward in spots, Those double negatives were confusing, some questions were just stupid and he overthought them, whatever…. Come back tomorrow at 9 AM.

Day 2
Step 1: Jim showed up at 9 AM to get behind 20 other people. He waited an hour just to get on the computer. He checked his answers carefully, made a few changes, and he passed with only 2 wrong. OK

Step 2: Get in line behind 20 other people to see the eye doctor. Waiting and waiting. Phone goes dead. Waiting and watching. Mind numbing Chilean TV. Finally gets in – look through here and tell me what you see. BTW, Jim is pretty blind in one eye. Actually it is so bad his eye doctor didn’t even give him corrective lenses. But he managed to pass, even though a lot of the pictures were very fuzzy.

Step 3: On to the games for reaction times and coordination. The first one is a game where you tap the moving ball with a stick. Jim was a little too violent with this game and the lady told him, “Tranquilo!” (Be calm, take it easy!) I think he was a bit stressed out by this time. Then on to the coordination test. These tests are hard to describe and we got no pictures since Jim’s iphone was dead.
He passed it all about 1 PM and they told him to come back at 3 for the driving test. So we went out for lunch and a few beers while waiting, (just kidding) Though I think he really needed one at that point.

Step 4: We show up at the parking lot for the driving test 30 minutes late because Jim didn’t understand the directions. Good grief! Where’s that beer? Well, fortunately, the other 20 people were in line in front of us so the instructor didn’t notice he was late.  Jim walks over to the instructor between tests. The instructor asks Jim if that is his car? Yes. And you have a license from the US? Yes. I have had one for 30+ years. Ok. No problem. Let me see your RUT card and you can pick up your license tomorrow. Come at 9 AM for the photo. Yes!!

Day 3
Jim showed up at 9 AM for some paperwork and picture and then was back at 3 PM for his new license.

It feels good to be legal!

And thirty days before March 8, 2022  Jim has to go in to renew his license with the vision and reaction tests.

And you thought the US bureaucracy was inefficient!

Read more by Lori about her and

Jim’s and their family’s life on a small homestead  in Chile
Our Chile Adventure
Ten Top Things I Love About Chile
Going Energy Independent in Chile
Their YouTube channel is:Chile Expat Family

And about us at Four Flags Journal
info@fourflagsjournal.com
Like us on Facebook
We invite you to add comments below

« How Can I Build Income Overseas? Part II
Economic Developments in Argentina »